Tell me about yourself. What was your ‘career journey’ up to this point?

The late 80s was a time of enormous turmoil in South Africa, a country deeply divided and at war with itself. The Apartheid government was justifying its policies using research produced by its propaganda machine. In good conscience, I couldn’t continue working in London when my country was burning – so at the age of 26, I decided to come home.

Fortunately, I was still young enough to believe that I could make a huge difference single-handed. On my return, however, I was shocked to find that there were virtually no research organisations doing social research, only consumer-facing market research, and so, with no managerial experience whatsoever, on 1 September 1987, I started Social Surveys.

What is the primary focus of Social Surveys?

Our founding mission was to use research to contribute to the transformation of the social, economic and political injustices that had become so embedded in the country. Thirty-four years on, and our mission is unchanged.

Although we are registered as a for-profit company, we were a very early manifestation of a social enterprise, operating as a for-profit while only taking on research and policy work that would make a difference and not taking profits out of the company. So conceptually, we were effectively more civil society than corporate.

Working as we were in conflict-ridden contexts, the market research techniques that were generally applied were of little use to us, and therefore, right from the beginning, innovation was in our DNA.

One of the ways in which we used our research to shift policy was to conduct large scale, statistically robust, advocacy projects that tackled issues such as the prevalence of illegal farm evictions since democracy, the size and scope of the non-profit sector, and barriers of access to education. These large, independent studies that were donor-funded proved highly effective ways of shifting discriminatory policies when presented to parliament and supported by a well-distributed publication of results and lobbying efforts.

After having spent so much time working in communities, and the realisation that much of our own strength came from our data, we decided we wanted to put something back into the communities we work with. Therefore in 2017, we established the Social Surveys Institute, a not-for-profit company sharing the same values as Social Surveys Africa. The Institute aims to support communities through data literacy, research, and monitoring and evaluation to help them thrive in a data-driven world.

What are some of the lessons you have learnt since COVID?

We learnt the benefits of partnering with like-minded organisations. This has been of considerable benefit, increasing our chance of getting grants and/or winning tenders, thinking about things differently and possibly most important of all, staying connected. We have all felt a bit isolated during this time, and I certainly miss the stimulation of one-to-one meetings.

Tell about about what work you are doing currently.

At the moment we are working very closely with communities based near mines. We help reduce conflict and contribute to the sustainable development of these areas. Although mining companies are becoming increasingly aware of the social risk associated with mine impacted communities, much still needs to be done to change their general mindset when dealing with communities. 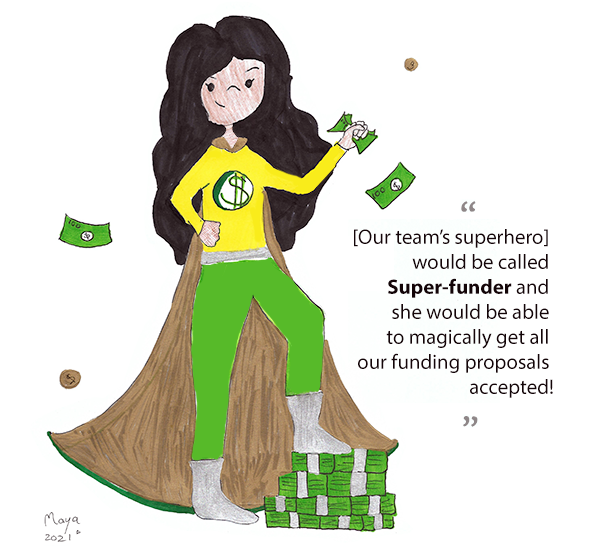 What advice would you have for NPOs who are under considerable strain?

If there is one thing I know about South African NPOs, it’s their incredible creativity and ability to do a lot with very little, within a context that they understand so well. So my advice would be to adapt where you can, stick to what you know, and trust your instincts.

What would you say to someone wanting to work in the nonprofit sector?

If you have the heart to want to make a difference, have the courage to dream and the tenacity to keep going no matter what,  then I would say join or start an NPO. It’s one of the most rewarding careers one could have.

If you could have a superhero on your team, what would their superpower be?

I already have several superheroes on my team, but if I had another, she would be called 'Super-funder' and be able to magically get all our funding proposals accepted. A superhero most NPOs in this climate would long for.

Where do you see Social Surveys in the future?

I see a group that is growing both in terms of the number and size of projects we take on but also the number of communities we touch – the stronger we are the greater our social impact.

Insights
SchoolNet SA’s purpose is to act as a catalyst and an enabler of positive change for the education system. Omashani Naidoo talks to me about her journey to lead this public benefit nonprofit company that focuses on ICT in education for teaching and learning.  What was y...

Insights
Established in 2009 to address widespread hunger in South Africa, FoodForward SA connects a world of excess to a world of need by recovering quality edible surplus food from the consumer goods supply chain and distributing it to community organisations that serve the poor. More than 80% of t...

Insights
The COVID-19 pandemic is the defining global health crisis of our time. Since COVID-19 first emerged towards the end of 2019, and the World Health Organisation (WHO) declared it a pandemic on 11 March 2020, it continues to have significant social and economic consequences for all sectors of Afric...

Kolisis call for fresh thinking after “a time of mayhem”

Insights
“We need to listen to what people dealing with challenging circumstances really need,” says Rachel Kolisi, co-founder of the Kolisi Foundation. This and other fresh new thinking is being championed by young philanthropists such as Kolisi and her husband Siya as key ways in which to meet the count...

Make your voice heard: Proposed Amendments to the NPO act

Insights
Those of us who work in the sector estimate that we have seen (and been involved with some parts of) about four or five processes of development of amendments to the NPO Act but none of these has seen the light of day, as new brooms have swept (not clean, that phrase is not appropriate) but they ...

Insights
The nonprofit sector is the only one with a name starting with a negative, communicating what it is against, not what it is for. Shakespeare once wrote: “A rose by any other name would smell as sweet”.  This is true for many things in life - freshly baked bread, popcorn at the movies, and t...

How to stop the degradation of our museums and cultural infrastructure

Insights
We are witnessing the collapse or near-collapse of key museums and heritage institutions in South Africa. How do we remedy this? This year is the African Union year for Arts, Culture and Heritage. This week the African Experts’ virtual meeting on Sites of Memory and World Heritage Convention in ...

NGOs must be part and parcel of achieving global SDGs

Insights
Social impact organisations’ engagement with the UN’s sustainable development goals is critical since their agendas are ultimately the same. While the Covid-19 pandemic rages, we often focus all our attention on surviving the day-to-day struggles while neglecting crucial global long-term...

Why your nonprofit needs a communications budget

Insights
In Nonprofits: We Must Break Out of the Scrappiness Cycle, Vu Le talks about the extremely frugal nature of most nonprofits. “We are always scrimping, trying to find the best deals, trying to get stuff discounted or preferably free. …  It has become a mindset that is ingrained...

Philanthropy and dubious donors: Should non-profit organisations take the money and run?

Insights
The world has become increasingly transparent with the advent of the internet and social media. We can, after all, see child labour and slavery, carbon emissions, river pollution, the impact of plastics and the disappearance of forests through logging and farming. We have access to more informati...
Back to Homepage