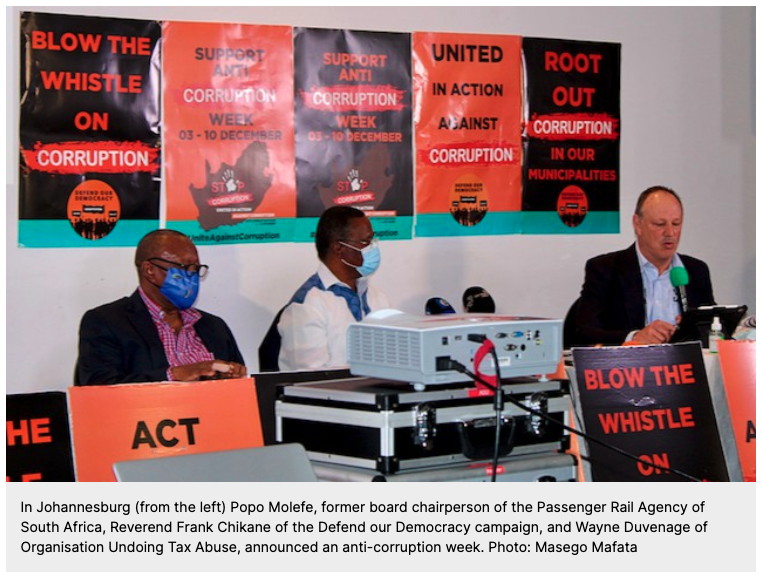 Civil society organisations are urging the public to participate in a “United in Action Against Corruption week” to run from 3 to 10 December.

Announced at a press briefing in Johannesburg on Monday and organised by the Defend our Democracy campaign, the week will build up to 9 December, International Anti-Corruption Day.

“The money that is stolen is money that is supposed to be used to serve the needs of our people,” said Reverend Frank Chikane, a founding member of the campaign.

He said corruption contributes to deteriorating levels of service delivery and poor living conditions. “We want to put a spotlight on corruption until we reach a stage where corrupt people fear honest and ethical people in government and the private sector,” he said.

The campaign is supported by the Right2Know, Corruption Watch, Organisation Undoing Tax Abuse (OUTA) and the Ahmed Kathrada Foundation. The organisations are calling for accountability, transparency and clean and ethical government.

Zaakirah Vadi, also from Defend our Democracy, encouraged people to mobilise in their communities during the anti-corruption week. She said corruption impacts communities directly in terms of health, energy, water, sanitation, and municipal-based corruption.

Duvenage called on the government to support whistleblower Athol Williams, who has testified before the Zondo Commission and who released a statement on Sunday explaining that he had been forced to flee South Africa on 1 November because of concerns for his safety.

The week will start off on 3 December with a lecture. On 5 December, there will be a march to the Union Buildings in Pretoria to deliver a memorandum to the presidency. Corruption Watch will release a report on whistleblowers on 9 December.

Defend our Democracy was formed in March by civil society organisations, religious leaders and individuals to “stand up against attempts aimed at destabilising the country”.

James Sleight
31 October 2021
Back to Homepage